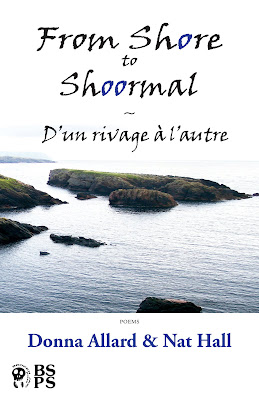 Whilst Donna Allard writes on the coastal fringe in New Brunswick, Canada, Nat Hall walks and writes by her shoormal, somewhere on the 60th parallel in her windswept Shetland Islands, Scotland’s most northerly archipelago. “Shore”, as described by J. L. Leprohon in her “Sea Shore Musings” poem, is the Creator’s power—in her own Canadian home, “Mysterious, moaning main,/ in dreams I’ll see thy snow-white foam”. It’s described by Chile’s bard Pablo Neruda in “No me hagan caso / Forget about Me”, as a place where the sea washes, throws up crab claws and skulls of many kinds …

“Shoormal”, as defined by Robert Alan Jamieson in his Shoormal, A Sequence of Movements (Polygon, 1986): “In Shetland, da shoormal is the shallows on a beach; the space between the tides where the moon weighs the density of the ocean …” that area where sand shifts.

From Shore to Shoormal is a journey between Acadia’s Shediac Bay and Shetland’s Ninian Sands—a celebration of the poets’ shared North Atlantic.

Posted by Joe Blades at 11:54 No comments: Links to this post 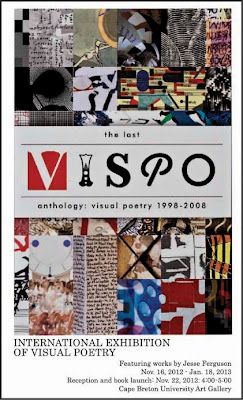 Poet Jesse Ferguson, author of Dirty Semiotics (Broken Jaw Press, 2011) is featured in an exhibition, in conjunction with The last vispo anthology: Visual poetry 1998–2008, on exhibit in the Cape Breton University Art Gallery, Sydney, NS, until 18 Jan 2013.
Posted by Joe Blades at 12:49 No comments: Links to this post