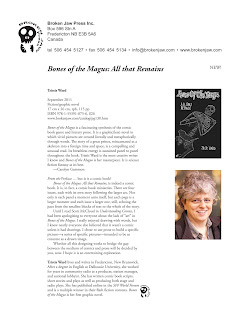 Bones of the Magus is a fascinating synthesis of the comic book genre and literary prose. It is a graphic(less) novel in which vivid pictures are created literally and metaphorically through words. The story of a great prince, reincarnated as a skeleton into a foreign time and space, is a compelling and unusual read. Its breathless energy is sustained panel to panel throughout the book. Tristis Ward is the most creative writer I know and Bones of the Magus is her masterpiece. It is science fiction fantasy at its best. —Carolyn Gammon

BONES OF THE MAGUS

All that Remains: A magician prince wakes up inside a church’s reliquary without his army, empire, weapons, or even flesh on his bones. What is left of his memory barely holds intact long enough to help him escape. But where on Earth can a skeleton hide?

Where There’s a Will…: Prince Magus Sical, on the run from both the law and the church, has taken refuge in the home of two hostages. He uses all he has left, his magic infused bones, to search for clues to how he died and how he might return.

Culture Clash: Where does a dead prince with a penchant for the arcane fit in? The Goths will never be the same once they’re drawn into the war between the undead and the self righteous.

Blood, Fire & Brimstone: In a battle between enemies of conviction there can be no walls left standing, no followers left free, no pawns left alive. Sical comes full circle in his quest to destroy everything that stands between him and his throne. But is he leading, or being led? Is he freeing himself from death, or being bound yet again to his mortal doom?