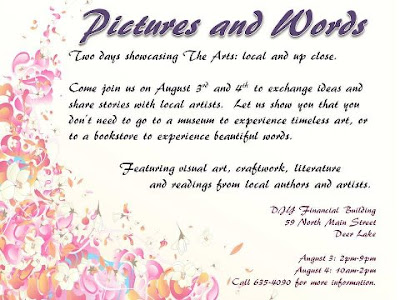 By invitation, Joe Blades will be participating in PICTURES & WORDS: A SUMMER VOICES 2012 EVENT wherein he will give author readings and promote his books. He has had three new poetry books since December 2010. He has never done author readings in Western Newfoundland, only in Labrador and St John’s, so this is a great opportunity, and for Broken Jaw Press.

Page One, a writers’ group in Western Newfoundland which has been promoting writers and other creators since 1987, has extended an invitation to me to participate in their annual Summer Voices Program. This year, at their closing event in Deer Lake (up the Humber River near Corner Brook), they are hosting a gathering of publishers, authors and visual artists in a two-day event on 3–4 August 2012.

The general public is invited to the event. There will be scheduled readings and at the conclusion of the event, Page One will have authors and audience share their work and partake in refreshments. This inter-genre event will hopefully the first of an annual series.

Page One has confirmation of participation from several publishers, authors, and visual artists but do not yet have a schedule [it might show up on Facebook, we hope]. They say they will enjoy having Joe Blades as one of their participating authors and as a representative from New Brunswick.