a little something . . . broadsides 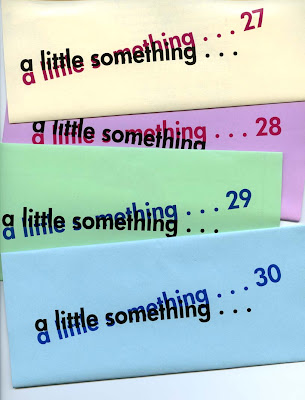 Chances are, unless you’ve been where I am when I am handing out Broken Jaw’s a little something . . . broadsides, that you’ve not seen one. Some recent ones are travelling with their touring authors. They get mailed (and not just to the Legal Deposit office of Library & Archives Canada!) and they are decidedly mailable.

I started doing/making/publishing them because of rob mclennan and his poem broadsides (above/ground press) out of Ottawa that happen wherever rob gets access to a photocopier. rob said that I should start doing something similar so I did, ten years ago, in 1999. I’m not nearly as prolific with them as rob, and nowadays I tend to print them inhouse rather than photocopy them.

a little something... is an occasional broadside series. They are neat publications, usually in a limited edition of 100 copies, that make a great promotional handout for their author. Each a little something... usually showcases one poem, prose piece, or visual in a 8½ x 11 trifold poster format. They tend to be published on the occasion of an author event . . . often a reading. 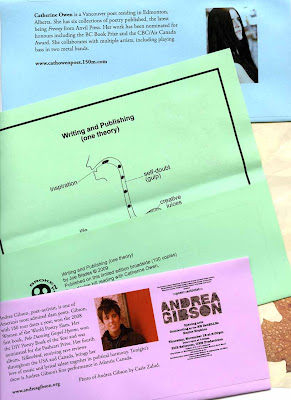 The four a little something . . . broadsides published to date in 2009 were for or because of author presentations in Bulgaria and Fredericton:

Interest in getting a set of these four broadsides? Sent $5, or a trade, to: