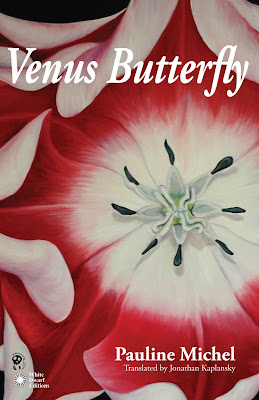 Allegorical novel, story for adults, poetic essay: Venus Butterfly is all this at once. With fresh, perceptive, nuanced writing, this reflective journey takes us into a wondrous world touched by humanist concerns. Venus Butterfly is a symbolic novel in which we witness the symbiosis of a child and a butterfly whose wings encompass every aspect of human life. It describes a rite of passage from childhood to adulthood, marked by the experiences and challenges that little by little shape an individual’s evolution.

A comet of light in a world of darkness.
—Marie-Claire Blais

Those who loved The Little Prince by Saint-Exupéry will appreciate this new novel by Pauline Michel.
—Serge Drouin, Le journal de Québec

Pauline Michel is a well-known artist and writer in French Canada. Expressing herself in poems, novels, short stories, plays, songs and stories for children, she also writes for radio, television, and film. Her cultural activities have taken her across Canada, to France and several African countries. Pauline was the 2004–2006 Parliamentary Poet Laureate of Canada. Her publications with Broken Jaw Press include the novel Eyes of Water (2006) and the bilingual poetry collection Funambule / Tightrope (2006).

Jonathan Kaplansky studied at Tufts University and received an MA in French Language and Literature from McGill and an MA in Translation from the University of Ottawa. He has translated works by Annie Ernaux, Hélène Dorion and Hélène Rioux. He currently lives in Montreal. Broken Jaw Press published Let Rest, his translation of Que repose by Acadian poet Serge Patrice Thibodeau, 2005; and Eyes of Water, his translation of Les yeux d’eau by Pauline Michel, in 2006.