After publishing four a little something . . .
broadsides in October and November, Broken Jaw Press,
@ 25, finally has two books at the printer. The first one is: 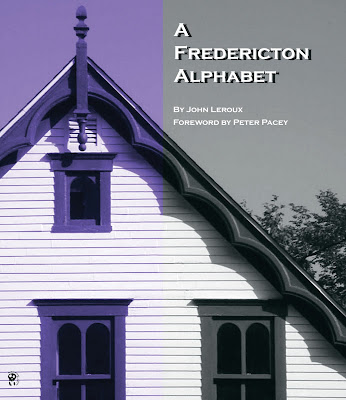 A new edition of John Leroux’s popular A Fredericton Alphabet.

Inventive book encourages readers to look a architecture with an eye for the alphabet.
—The New Brunswick Reader

A is for affection . . . Leroux gives a glimpse of the hidden story, the intricate craftsmanship that is one part of making up the impressive whole. He shows the care and love builders brought to the building and thus to the community.
—The Daily Gleaner

John Leroux has captured some of the treasures of Fredericton’s architectural heritage with this creative combination of his own architectural perspective and his Artist’s vision. This book invites us to look at architecture in a new way and helps us to recognize anew the rich texture that this resource lends to the everyday ambience in our wonderful city. The idea of a new book with a new look at Fredericton architecture has long been overdue . . . This volume is an exciting first step in the process and it is designed to appeal to a wide range of readers: both the aficionado of built heritage and the student, layman or neophyte, who wants to see clearly and with fresh eyes. Here also are some prime examples of an array of the elements that add to the unique style of old Fredericton.
—Peter Pacey, Past President, Fredericton Heritage Trust

Fredericton is celebrated as a city of poets, but is it too far-fetched to speculate that maybe there is a deeper connection to the ornamental alphabet which graces our buildings and our illustrious literary past? Perhaps, but we cannot deny that our region is rich with craftspeople and artists—poets of materials as adept at working wood and stone as anywhere in North America. If you immerse yourself in the historic neighbourhoods of Fredericton, you will be astounded not only by their vibrant expression and material quality, but by their humanity; they are mirrors to our own virtues . . . our historic buildings exude life.
—John Leroux, from the Introduction

A Fredericton Alphabet is a black & white photographic exploration of Fredericton’s rich heritage buildings, captured in a unique manner that illustrates the ties between architectural ornament and the letters of the alphabet.